Endophthalmitis is the inflammation of the inner part of the eye. It is by definition infective in nature and is usually secondary to a surgery. Trauma and infection in the body are the other less common causes of endophthalmitis.

Endogenous endophthalmitis:
Infection in the body spreads through blood stream and results in a low grade endophthalmitis. Symptoms include floaters with mild decrease in vision.

Diagnosis:
Endophthalmitis is a vision threatening condition. Diagnosis is based on the symptoms and clinical examination. Prior to treatment, sample is taken from the vitreous which is sent to microbiology lab to identify the causative organism and its specific sensitivity to antibiotics. Treatment is in the form of injections or vitrectomy.

Treatment:
As stated before, treatment is in the form of intra-vitreal injections or vitrectomy. The nature of treatment is dependent on the severity of the condition. The role of the treatment is to limit the damage caused by infection. The visual outcome will be known only after the infection has subsided and the eye has quietened down. Intravitreal injections (antibiotics or anti fungal) help to reduce the burden of infection thereby helping the eye to recover. Initial therapy is usually empirical and usually covers gram negative and gram positive organism. An anti fungal injection is also added in case of suspected fungal infection. Subsequent treatment is modified based on the microbiology report of the vitreous sample. Vitrectomy is reserved for eyes with worse clinical condition. Vitrectomy helps to reduce the infection load and optically clear the vitreous thereby facilitating rapid visual rehabilitation. In eyes with post traumatic endophthalmitis, wound repair and removal of foreign body, if any, also needs to be done.
In addition, the eye also needs to be treated with eye drops (antibiotics, steroids, cycloplegics) as adjunctive therapy. Similarly, systemic antibiotics and analgesics also form a part of the treatment strategy.

Intravitreal injections need to be repeated till the doctor is sure that the infection has subsided. Over all the treatment of endophthalmitis is a slow process and the visual outcome is guarded in the best of hands. Early institution of therapy is the best way to salvage vision in this situation. 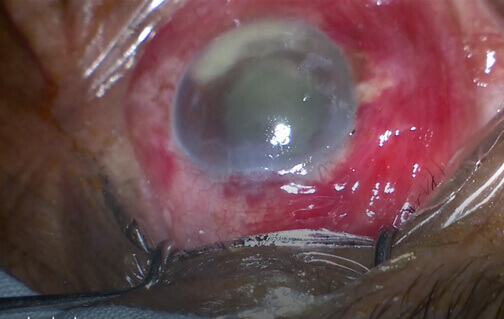